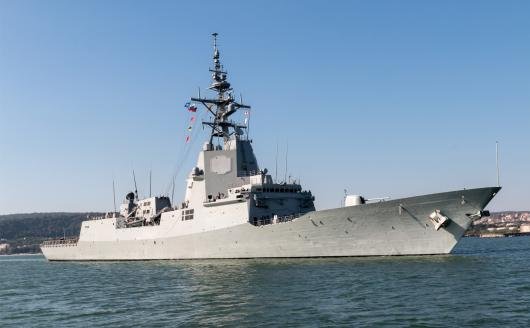 This story was sent into Hypnotic World by one of our visitors. Why not send us your views?

Ok I shall give you my experience that I have had recently, I don't know if it is a past life experience or maybe its just something I have seen on TV and then remembered it in a dream - that's the trouble when it comes to this sort of thing.

A couple of nights ago I had a dream that I was on a warship in the bridge area. The funny thing about the ship was that it didn't look like a warship although in the dream I knew that it was. I am in the navy reserves so I know what a warship looks like this one had way too much glass in the bridge and the shape of the ship was inconsistent with what I would say a warship should look like. I was on the bridge of the ship and we were at port, outside were Japanese who were not taking any notice of us, all of a sudden they opened fire at us. The next thing I remember was that I was standing outside of the ship and someone asked me the name of the ship, I remember me saying it was the HMS Atlantis.

In the morning when I woke up while it was still fresh in my memory i went on the internet to look for a HMS Atlantis - just in case cause it was a vivid dream and since there was a name to the ship. There wasn't an HMS Atlantis but there was a KMS Atlantis - a German ship from the second world war, this is where it gets interesting.

The HMS Atlantis was a merchant ship before it was commissioned at the start of the war as a warship which would explain that in my dream I didn't see it as looking like a warship. As part of the tactics of this ship it disguised itself as many a neutral vessel; these vessels included the Soviet Kim, the Norwegian freighter Tamesis and the Japanese Kasii Maru. The last one is interesting as it corresponds with the dream, when the Atlantis disguised itself as the Japanese vessel it was not successful in its disguise I don't know if the Japanese then attacked it but it would make sense.

Since none of my family was in the forces apart from my grandfathers who were in the army in WW2 it would explain why I wanted to join the Naval reserves. I have had many a dream before about different places that have been so vivid with so much detail, even having sensations like touch in them. A particular place that I have dreamt about a few times is Russia, I have always had a strong connection to the place even though I have never been there and have even started to try and learn the language.

I don't know if you believe in psychics and I must admit I am a little skeptical about psychics myself and even in past lives, but when I got a psychic reading for my birthday she told me a lot of things that were true including how a friend of mine committed suicide. What she said to me was that I should get regressed as I go way back in history and that not only should I get regressed but I would have something to do with regression itself. Now I am not totally convinced over regression as I believe that since hypnosis puts you into a very susceptible frame of mind, if someone tells you to go back then your mind will create a total new identity for you. However I do want to get it done just to see. If you know of anyone who would do it in the central Scotland area please let me know, I promise to keep you updated!!!

Anyway its good to actually tell someone without them thinking I am totally weird, well I hope you don't.