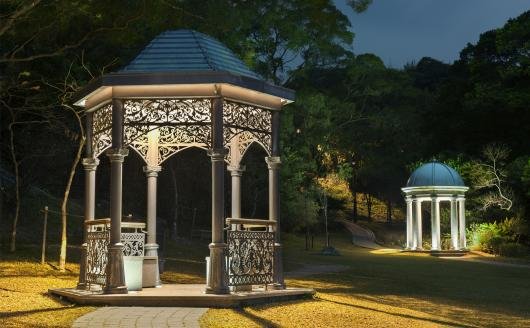 I started to have a recurring dream at a very early age. In the dream, I was a little girl riding a bicycle across a bridge. I would look to my left and see a park and a smaller bridge lower than the one I was on.

There were people crossing the bridge. There also was a big gazebo on a hilled area.

The women were dressed in long dresses with high necks. The men in suits. As I rode over the bridge I seen a house that sat on a hill in front of me on the right.

There were light poles on both sides of the bridge. They were very old in style. The dream changed to me following a funeral precession . I wasn't a part of it, just an observer. There were both horse drawn coaches and very early automobiles.

The procession crossed the bridge, turned to the left and than to the right. They go through a grove of pine trees and turn again to the right into a cemetery. Every one is dressed in black and very sad. There's a large tower in the middle of this cemetery. I'm in a far area just watching this.

I had this dream often as I was growing up. I stopped having it when I was some where between 10 and 12 years old.

Growing up, I was scared of riding my bike with other kids. I would never ride in the street. I stayed on sidewalks and walked my bike across intersections. I always felt something was going to come from behind me.

About 11 years ago a childhood friend of mine wanted me to go to Galena, Illinois with her.

Galena is a very historic town just east of the Mississippi River. The town is like it was in the 1800's.

This friend was aware of my old dream. I hadn't talked about it for 30 years or more. I had never been to Galena and thought it would be fun. We drove into the town and came upon a bridge. I got chills when we crossed it. It had old style lights. I looked to my left , but there wasn't a walk way bridge. There was a gazebo on the crest of a hill in a park. I looked to the right and there was a house on a hill. It looked different than in my dream. I alerted my friend of the feeling.

We decided to relive the dream route. We turned to the left at the end of the bridge. We took the first right. Instead of trees we were in a housing addition.

We drove for about 6 blocks and came upon a cemetery to the right. It was an old Irish cemetery with a tall lead -shot put tower in the middle. We looked at every stone, trying to get a feeling or memory, but found nothing.

We stopped at a service station on the way out of town. I asked an elderly gentleman about the gazebo in the park by the bridge. He said it had been rebuilt. There had been a gazebo and the park from before the 1900's. There had been a walk bridge at one time also. It was going to be rebuilt . The lights on the bridge were just added. They had the old ones replaced to look like the original lights from the turn of the century.

I have never had the dream since, but I truly feel it is from a past life.