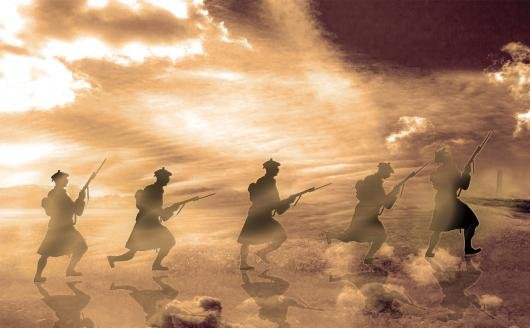 I was amazed to read of someone going back to WWI. All my life I have this scene in my mind of a soldier of that era.

Behind him is a blazing sunset. His figure is dark against this magnificent display of evening colors. I can see in my mind, the image of a WWI helmet and uniform, which he is wearing.

About a year ago I saw the very same image in color on a special of the war. At first I thought I'd seen this on TV some time in the past, but I was fully grown before we had color TV.

This haunting image haunts me today. I have thought about your email to me concerning the WWI Soldier image in my mind. I reread your email and want to tell you that you may certainly publish my experience in any way you wish. I have no problem with it being on the same page or whatever. I would like to have a copy of what the gentleman wrote for I cannot find what I read for the life of me. I have tried to retrace where I read it, but I can't find it. I remember when I read it this afternoon, I was so surprised I could think of nothing else but of replying.

I would like to relate something else to you concerning the uncanny .(I understand Sigmund Freud allowed for the uncanny as being something real and valid in the human experience.)

It was an ordinary day after work. I was a school teacher here in Atlanta and as usual after doing battle with teenagers, I was exhausted. I remembered I had planned to go to the movies with a couple of friends and thought I'd take a nap and rest up before joining them. I drifted off to sleep and had a dream. I dreamed or whatever, that the three of us were going into the movie house and there were two swinging brown doors, one for in and the other for out. I had never been to this place before and knew nothing about it.

Just before I placed my hand on the door to open it, out came Walter Culbertson, a person with whom I had taught in North Georgia many years ago. My two friends did not like Walter. He came out and we exchanged greetings. He told me I would enjoy the film and so on. My alarm clock went off and I got up. My two friends came and told me we had better get on to the film for it was to begin in 30 minutes or so. I told them of my dream exactly as I have written you. There was little comment from my friends about what I related to them.

We arrived. I was to relive in an instant what I dreamed. I thought it strange about the brown, swinging doors at first then I placed my hand on the in door and out came Walter just as I had dreamed less than an hour before.

My two friends were speechless. No one knew what to say. They didn't speak to Walter and as I dreamed it ,we said the same things as in the dream. This was approx. 1980 or 81 at least and I have never forgotten it. Walter left teaching and went to London where he reportedly studied culinary arts. A couple of years ago I heard through another mutual friend he had died some years back. This, though not a great event by any means nevertheless leaves me shaking my head to this day. Was it clairvoyance or what? I have no explanation. The WWI Soldier comes to mind rather often.

I once had dreams as a child of having lived in a concentration camp with all its horrors. It was a nightmare of medical experiments I'd witnessed. This is one I try not to recall. I have studied in Germany twice and am a fluent speaker and I am certified to teach the language. I also speak Spanish and fairly good French when I have to.

On the first study trip in 1978, I began to feel as if I had been in Erlangen before and then when we went on a trip to Dacau, I became so uncomfortable, I could hardly breathe. Then once before that while on a trip to Normandy in 1969, I felt I had lived there before and the landscape and architecture were so familiar.

That was my first trip to France. I could go on and on. Being the eternal skeptic, I've often thought I must have taken all this in from my father's experiences in WWII, but my father refused to talk about the war. In fact it was only two weeks or so ago that my brother Richard and I were talking and he related some things Father had told him. Things he never would discuss with me because he knew I'd had night terrors of that period of time. He would come in my room during the night and comfort me and hold me until dawn.

Richard tells me now Father had to dispatch several Germans. One was a guard at Dacau. I can't write any more about that.I just wanted to relate a few more things to you. There has to be something to past lives and so on.