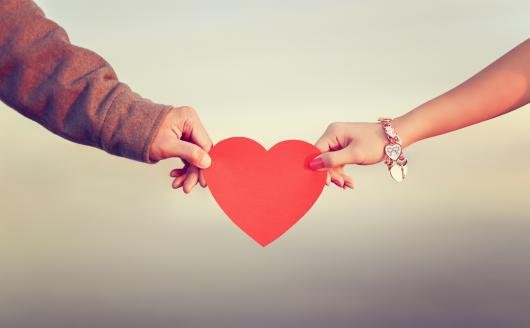 Connection from a past life (Photo by © dobino - stock.adobe.com)

This account was sent into Hypnotic World by one of our valued visitors. All contributions are gratefully received. The photo of the Heart Tree was taken on a trail near Molly's home - it just goes to show how love can grow in the places you least expect it to.

Hi, I am a 51 year old woman, and something unusual happened to me this spring upon meeting a gentlemen at work.

I had just started a brand new job when a man appeared, a co-worker shook my hand and introduced himself to me. After he did that it was like I heard a popping in my head, and I was surprised he spoke with a foreign accent.

I was immediately attracted to him and found it almost impossible to talk to him. As time went on I found myself able to talk to him, at first I thought it was just a crush, but as time went on I grew to feel very close to him and he with me. One morning I awoke to find the feeling that I had known him before. I told him I felt that I had a connection with him, which I'm not sure quite how he interpreted.

He was from Germany and was married. He had left his native land some twenty years before, and told me his father had died in WWII, and that he was born shortly thereafter. His mother had to struggle to survive right after the war, they lived in a bombed out basement for awhile and he gotten frostbitten as a baby. On another morning I knew who I had been, his father...

Then I began to remember all sorts of horrible war like dreams I have had all my life, even as a young child, the sound of bombs dropping, looking outside and everything was on fire, people living under bridges in unspeakable conditions... And for some reason I loved his face...As if there was some incredible connection, could he have resembled me in my past life? Or in my dying moments wanting to gaze upon the face of my own child not yet born?

During a brief visit to lake Tahoe this summer I asked him/dad if he could tell me his name, and learned it. Later I asked my friend the name of his father, which was in German and different from his, and it was the same name.

There is also a birth mark on my leg which I believe could have been the entry wound that eventually killed his father.