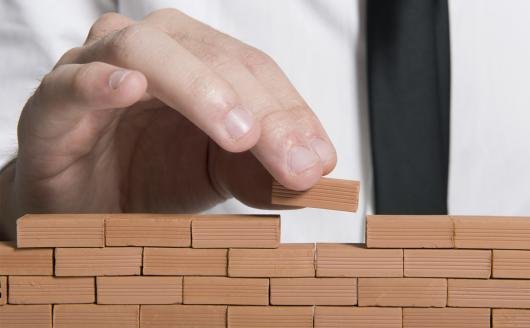 When you are being regressed into a past life or an earlier time in this life, either with a hypnotherapist or by using self-hypnosis, you may find that you reach a certain point and can't go any further back, when this happens it can be difficult to know exactly what to do.

There are several ways of dealing with this problem. I'm going to give you a few examples which I hope will give you some ideas, should you come across this.

Jill regressed back to when she was 10 years old and couldn't remember anything at all previous to this time. Through using ideomotor signals with the fingers she was able to confirm that something had indeed happened to her at this young age to cause her mental block.

ME: Subconscious mind would it be alright for Jill to know what you have been protecting her from?

JILL: No. (Through finger signals)

ME: Then as we're both trying to help Jill, would it be alright for me to know the reason?

ME: Subconscious mind who would harm Jill?

JILL: Jill would, she's was a very bad child.

ME: What did she do when she was ten that was so bad?

JILL: She lied. She lied to her mother.

ME: Maybe Jill had a good reason to lie?

JILL: No, she shouldn't have done it. She meant to lie and it caused her parents to get divorced.

ME: So Jill's parents divorced because of one little lie?

ME: Subconscious mind can you remember what that lie was?

JILL: She told her mother that Dad had been out with another woman but she said it because she was angry with her mother because she wouldn't let her go out. She knew Dad was working but someone had seen him with someone else once and she just lied for spite.

ME: Well it sounds like it wasn't such a lie if he'd already been seem with someone else.

JILL: Yes but that night he WAS working. And she didn't tell mother it was a lie.
ME: Subconscious mind had it occurred to you that mother might have already been suspicious that he'd been seeing someone else and that lie just brought the secrets up to the surface.

JILL: Jill was bad. If she'd owned up they'd still be together.

ME: Subconscious mind did you ever listen in on your parent's conversations?

JILL: Yes. That night she accused him of seeing someone else. I was hiding at the top of the stairs and he admitted it. But not that night, he'd been working. And if I hadn't said anything they wouldn't have split up. They'd still be together.

ME: Subconscious mind your father would have been caught out sooner or later. You saved your mother of more pain and humiliation of being subject to even more lies and deceit from your father. Was your mother happy after that?

JILL: No, she suffered from depression for nearly two years after that. Then she met my step dad, Dave, she's happy enough now.

ME: Is her life with Dave happier than the one with your father?

ME: Subconscious mind can you see how you've been carrying this guilt around with you for nearly 20 years? And there's no need, your Mum did well, she's happier now than she's ever been. And you can congratulate yourself from doing a good job. You KNEW your Mum wasn't happy and your Dad was cheating on her. Whether it was right or wrong for you to tell, it doesn't matter, because at 10 you don't always know what's right or not, especially in circumstances like that. You did what you did because deep down you hated your Mum being cheated on and lied to. So can you let go of that guilt and move on with your life?

JILL: Yes I think so. I didn't think of it like that, yes, I did her a favour really, thank you.

ME: Are there any other reasons for your mental block?

The above is as near to a verbatim as possible of that actual part of the session. When Jill regressed again she could remember how her parents were always quarrelling and not one night was spent at the top of the stairs, listening quietly, but five nights out of seven. She also remembered her father coming home drunk and 'taking it out' on her mother. She was able to deal with these memories rationally Consequently she later experienced a past life regression.

In this example Sue's block was experienced as 'a brake being put on'. She could enter into hypnosis and regress back into her own childhood, she could remember being a baby of six months, but she could regress any further.

Because Sue had already likened her mental block to 'a brake being put on', we used this brake in the healing process by having Sue visualize herself driving a vehicle. When she came across any difficulties in life, the brake would come on, and Sue would practice deep breathing techniques whilst at the same time gently 'releasing the brake'. This was done several times in minor situations, gradually increasing the discomfort of the imagined difficulties. She began to realize that the deep breathing coupled with 'releasing the brake' gave her control over her blockage and she was able to regress further back.

Before she eventually experienced a past life memory, Sue had another major insight. It transpired that she had been adopted whilst younger, although she had failed to mention this at the commencement of the sessions. Her block originated from the trauma of being separated from her birth mother and once old wounds had been healed she not only felt 'whole' but she also had a profound regression which she found to be extremely significant for her.

Dan regressed back to his actual birth but could not go further back. His entry into the world had been a terrible ordeal as the umbilical cord had wrapped around his neck and he almost died at birth. Forceps had been used and Dan realized why he had always suffered such terrible headaches. He quickly came out of hypnosis during this birth experience and was reluctant to go back into hypnosis. However he was taught to dissociate himself by watching from a safe distance as he underwent the birth again. From there he was able to regress even further back to his earlier life as a farmer.

Rosie's block came in the shape of an extremely hard boulder. Whenever she got so far the boulder would appear in her way. Rosie visualised herself with an axe which was far harder than the boulder, and she would hack away little pieces of the boulder bit by bit. It took several attempts for Rosie to penetrate through to the core of the boulder and discover that it was really her fear. She learned that she was afraid of death and the idea of regressing with the possibly of confronting her own death in a previous incarnation filled her with terror.

Rosie's fear stemmed from two extremely emotional experiences during her formative years in the presence of, firstly, a dead bird, and secondly, a dead human. She had been curious about the bird and reached down to touch it, only to have several dozen flies fly up into her face. The second instance occurred when the dead person moved unexpectedly, probably as rigarmortis was setting in. Because she was able to understand where her fear had originated, Rosie was able to put it into perspective in her mind and it soon lost its importance. Rosie was soon able to regress without the boulder and allowed to choose which parts of her previous life, to view.