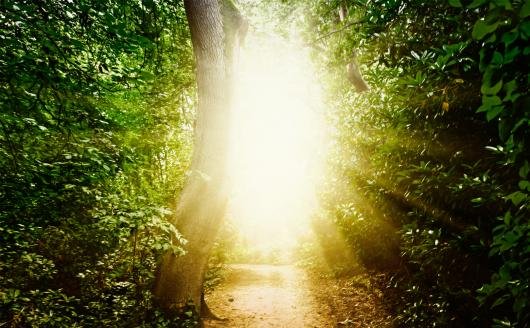 Everything in my life altered following my NDE.

Previously I had been very unlucky both in love and business. Every time I was upon the verge of benefiting from life's labours - somehow every thing would collapse and I would end up broke and homeless.

Two years ago I was travelling in a car having hitched a lift. At the time I was in Stoke on Trent and wanted to go to Liverpool. A car stopped and I got into it. I was tired and it was late at night - raining hard. The car's heater was on and I dozed off.

I remember a loud bang and a dirty orange coloured fire ball. I was then talking to my sister who had died seventeen years previously. I remember thinking that it was odd that my sister was looking older than me ,, since she had died very young at aged 6 years, and she now appeared to be in her thirties.

My sister said she wanted to show me something about myself. I watched my whole life reel out before me and felt extremely embarrassed and I remember saying (or thinking) if I had the chance to rectify things in my life then I would do. The result was that I hit the bed in hospital with such force that I felt the bed springs recoil and was instantly awake. I got off the bed and walked down the corridor towards what I thought was the exit. Apparently I fainted through lack of blood and was returned to the hospital bed. Two days later I discharged myself. Nothing has been the same since.

My NDE revealed to me something that had dogged my life for fifty years without me being aware of the same.

Briefly, (and I will have to be brief here); when I was 12 years old, I and a school chum decided to skip school lessons and entered a church to hide away from the school teachers.

During the hour or so that we were in the church we both experienced the need to use a toilet. As a result we used the large bible that was on the lectern. I know that's a terrible thing to do and cannot explain the reason for our joint actions.

The following day the vicar of the church spoke to my chum and I and we admitted the offence. The police were called and we were placed into a remand home for boys pending a court appearance and stayed in custody for six months.

At the magistrates court it was found that we had not committed any criminal offence and this resulted in the outraged vicar giving the court a strong lecture and roundly condemning my chum and I.

I think everyone in the court was fearful of the vicar who so strongly condemned everyone within the court for allowing what was a sin against God to go unpunished. The result of all this was that my chum and I were placed in 'Care of the Court'.

I was sent to London and into a SOS Hostel for Men (I was only 12 years old at the time) I had no idea where my chum was going.

While I was in the hostel I attended school and that is where I befriended Ronnie and Reg Kray (The Kray Twins). Naturally I committed petty criminal acts basically because everyone in the East End were all doing the same thing.

Unfortunately for me a chap gave me some money that was the profits from a job he had pulled. Stupidly I opened a post office bank account and later was arrested and sent to an Approved School for three years.

Afterwards I gravitated back to London and the East end because that was where the only people I really knew lived. Violet Kray (Reg and Ron's mum) looked after me for some time.

It was then that I was introduced to Sir Peter Rawlinson Kane, he was a toff and a real gent, but his title was false (I was to later find out).

Sir Peter wanted a driver and he had learned from Violet Kray that I could drive as I had been taught to drive a tractor at the Approved School. (I can promise you that anyone who can drive a tractor can drive anything with wheels fitted to it).

I was just 19 years old at this time and had not ever had a proper job.

I drove Sir Peter and his ladies from hotels to night club all around the West End. Upon numerous occasions I drove just his ladies to various country residencies in Buckinghamshire, Kent, Essex etc.

On such occasions I always had to use one of Sir Peters Roll's Royce's. Then one night I was stopped and it transpired that I had for some time been ferrying non other than Mandy (Marilyn Rice-Davies) and Christine Keeler around the mansion circuits.

On many occasion I would have been chatting with the other chauffeurs doing basically the same thin as I had been doing. The reason I was stopped is because someone had said that I had been taking photo's of the people entering and leaving the various country houses (this was untrue as I had never owned a camera).

The people who had stopped me were Special Branch Police. The police had raided Sir Peters flat and discovered tons of photographs depicting members of Parliament, royalty and call-girls etc.

I was promised that if I admitted the offence and gave the police all the photo's and negatives I would go free once I had signed a statement restricting me to perpetual silence regarding the matter. I would very willingly have complied if what they were accusing me of doing had in anyway been true - but it was a false claim against me.

I couldn't have complied regardless if they offered me a million pounds. The result was that I was sent to a maximum security Borstal for a full 3 year term on the trumped up charge of being in possession of stolen clothing (fur wraps that belonged to both Mandy and Christine.)

So it was that I set about printing $US and £ sterling - also driving licences and anything else of value. Some years passed and I had a good run.

I was living better than Sir Peter, did not court prostitutes and loved living a free for nothing lifestyle. But all things come to an end and I was sentenced to eight years prison.

The only laugh left for me was that I was sent back to the maximum security borstal (Hull Prison) that had tempted me into the life of crime initially.

I decided that I would never commit another crime again and get a proper job - work hard - go straight etc, and I have done.

But for all my ups and downs (and that which you read here is a mere sketch) every time I have neared the top and should have reaped the rewards I have miserably failed.

Everyone else has benefited except me (Boo-hoo) This is where my NDE comes into play and taught me something that - for over fifty years had clung to me like glue.

That the vicar who gave such a rollicking to me, the magistrates court, the police and humanity in general - had actual "Cursed" me and my chum. It was purely by accident that a car that I was travelling in brought me face to face with death or life.

I learned that a vicar or a teacher, even a mother or a father can curse a person who is strictly speaking 'under their control.

I was cursed and remained cursed for fifty years.

Following my NDE I vowed that if that vicar was still alive I would rip the bastards heart out. And if he was dead then I would dig the swine up again and kill him all over again.

I was livid, I was besides my self with rage, that a vicar would do such a thing to two twelve year old boys. I had a lifetime's evidence of personal proof - and my life had reeled out before me in greater detail than I would have normally remembered.

I went back to that church with murder in my heart and the ability within my muscles and sinews to drag the last breath of life from that vicar - and enjoy doing so.

I discovered via the incumbent vicar that my prey had died some 20 odd years ago. That his ashes were strewn within the church grounds and flower beds.

Dear God! I cried silently to myself - my tormentor has evaded my plans.

It was some time later that I returned to the same church and told the new vicar my problems and that which had happened to me.

The Vicar knew about such curses,, said he could end the curse, and did so.

I then found out that my chum had experienced a life even worse than mine. Two of his children had died from cancer. He was even blamed by his wife for their children's deaths. She divorced him. He had become a petty thief, was in and out of prison like a yo-yo. Then he became a gambler and lost every penny that the state provided him to live upon. Then he became alcoholic.

No sooner had I stepped into his life again after all these years - I immediately and swiftly stepped back out.

When the curse was broken - I felt - not physical change - until I was driving back to my home.

Suddenly I felt clean. It seems now that whatever I do, I do with care and consideration for others. I have more people befriending me than at any other time in my life.

Most doors are open to me and I'm welcomed wherever I go.

Sure I have an occasional drink - whenever I fancy one or two. I enjoy a smoke etc. I've not become a God-botherer and don't haunt any church pews on Sunday's.

I respect life and love life. For all that I thank my NDE.

Publish what you will of this, it might arouse some peoples desire to reach for whatever they search.