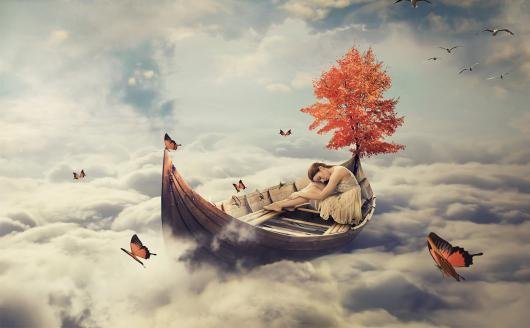 Every night we all dream. We don't know HOW we dream, but we do - each and every one of us. Some people claim to never dream at all but what they really mean is that they don't remember their dreams...

I've been interested in dream work since I was a small child. One of my recurring dreams began at the age of eight. Every night I dreamt I had been kidnapped and taken in a white van to an old, empty house in Staffordshire, England. The house was in the middle of nowhere, and I remembered being tied up with a pair of long black curtains.

At the same time my sister would dream that I had been kidnapped and taken away in a butcher's van. She would chase after the van until it sped out of sight. We often remembered dreaming our (twin) dreams the same night. Mine went on for many years but nothing similar to the dream content has ever happened to me in this lifetime, so it doesn't seem to have been a premonition.

Another recurring dream was less dramatic, but actually involved a set of circumstances relating to every day life, in the town where I live now, but the town is nothing like it looks now, or as far as I remember, has ever looked. The dreams are usually about visiting a restaurant (that doesn't exist), a dress shop (in a part of town that now holds a college and a block of Council offices), and a public house. The pub doesn't exist either, but one night about twenty years ago, I remembered the landlord's name in the pub was Mr Braithwaite, and that his son was helping him out.

I always had it in my mind that the period in which my dreams were set was the late 19th century, and after dreaming one night of the landlord's name and the location of the pub, I set out to explore the microfilmed records in our local library.

Within an hour or two I discovered that a certain Mr Frank Braithwaite had succeeded his father Alfred (or visa versa) as landlord of The Royal Oak pub in Doncaster, in about 1895. This was a very exciting find for me, particularly as records showed that the pub had been demolished in the early 20th century and I knew there was no possible way I could have learned about these facts. Also they were so mundane that if I had read or heard about it in my childhood, why on earth should I keep on dreaming those same dreams?

Often one dream would follow on from another. One thing I often realised in my dreams is that I dream I am someone else. Having spoken to quite a few people about their experiences, this seems to be quite unusual.

After a while I just learned to accept these recurring dreams as part of normal life, however I am convinced that memories of previous incarnations are a natural phenomena in the dreaming mind, and anyone interested in past life regression, would do well to study their own dreams by keeping a dream journal.

All you need, to keep such a journal, is a pen and an exercise book at the side of your bed. The most important thing is to write down your dream immediately upon awakening. Don't wait five minutes - or even five seconds, or your dream will be gone. Recall it the very instant you wake up and write it down.

You can train yourself to wake up during the night and write dreams down. Simply give yourself a suggestion before you go to sleep, "I will wake up after every significant dream and write it down".

When we were kids we had our own method of giving ourselves suggestions - we had an imaginary key to a door in the mind which we would unlock (on the forehead), write the message (with the finger), then lock the imaginary door. A very childish thing to do, but it worked every time.

So, keep a record of your dreams and look for any similarities that occur. You may also find past life memories entering your mind when you are relaxing at home (or at work, if you dare). I used to do a very repetitive job which I could do automatically, and without thinking. My mind would often wander and all sorts of memories would pop into it.

When you're reading your dream journal, look out for symbols. Things aren't always what they seem. Quite often the symbols in your dreams are what they mean to you, rather than archetypical symbols as mentioned in many psychology books. For example, I dream I am in a house of disrepair, sitting on a broken chair. In reality the house is my business which I built up from scratch, but it is in disrepair because I have been neglecting certain issues, the chair symbolises instability for me, something that is not strong enough for me to believe in. It is an idea that has been put to me, which I do not have enough confidence in, I feel it will 'fall through'. Now some one else might interpret that dream differently than I, but because it was my dream, I am the only one who can know the full meaning of it.

When you find certain similarities or themes cropping up in your dreams which, under close scrutiny seem to have no bearing on anything that's been going on in your everyday life, this could signify a past life memory; so try to keep an open mind - you could be on the right path.

One method of interpreting a dream is to write it down and highlight key words in your dream.  Then imagine that you're explaining your dream to an alien from outer space who knows nothing at all about this world.  If you dream (for example) that you're speeding through traffic lights in your car with your partner, your key words would be 'speeding' 'traffic lights' 'car' and 'partner'.  Explain to the alien exactly what speeding means (going too fast) - traffic lights are usually (a time to stop or slow down) and the car is a vehicle (your body), your passenger is your partner (someone who is with you) - maybe this relationship is going too fast for you and you need to slow down.

Listen to your dreams - they may have something very important to convey.