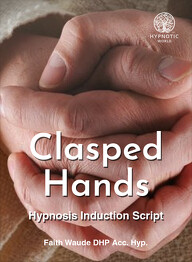 A common induction involving the clasping ... Read more of hands.
Jump To:ScriptDiscussions
By Category
59Inductions
By Tag
Related Tags...
For some people, the only way to be hypnotized is by direct induction techniques. These are generally authoritarian methods and are commonly used on stage.

Not everyone will comply with this method but some of the types of people who will do are those who are used to taking orders, for example, those who work in the forces, (either armed or police). Dave Elman was a master of direct induction techniques and his book published, Hypnotherapy, outlines his approach in greater detail.

Ask your subject to clasp his hands in front of him, then say the following:-

I want you to press your hands together tightly now, really tightly so that you can feel the palms of the hands touching each other.

Okay so try to pull the hands apart, try, and notice that the hands are just too tightly clasped together that they simply don't open at all. And the harder you try to open them the tighter they feel.

Now relax the hands, stop trying to open them, and just let them open, let them open easily and the hands are moving apart now (take a look at those hands) - there - they're opening easily now.

How can this script be improved? Please check all that apply:

Thank you for your feedback. We will check any script issues that you have mentioned.

Script feedback and questions from hypnotherapists:

The glued hands induction can also be used...

The Finger Technique is a short rapid...

Use hand-levitation to create a deep...

The rigid arm induction is an excellent...

Remove suggestions of relaxation that can...

Induce a client into a hypnotic trance...

Use the eye focus induction to rapidly...

Use the Echo Induction to take you in...

Induce a hypnosis trance with the...

Float away on a cloud with this hypnosis...

...Perhaps you can also create the most...

A common induction involving the closing of...

An induction to be used with a hypnotic...

Using candles, real or imaginary, to...

An ideal induction and visualization that...

A hypnotic induction to help quieten the...

For this induction we use a color ball lamp...

A hypnotic induction for use with groups of...

Overloading a subject can be a very powerful...

The Magic Carpet induction is ideal for...