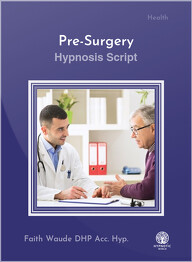 Is your client due to go to hospital for an operation?

This hypnosis script download can address a fear of surgery and prepare them for a successful outcome.

One of the first men to really discover and put to extensive good use, the power of hypnosis, was an English surgeon named James Esdaile.

His interest in mesmerism (later known as hypnotism) began before the word hypnosis was phrased. In 1845 he went to India and had phenomenal success with mesmerism, copying Mesmer's techniques and applying them diligently. In those days the mortality rate in surgery was around fifty percent (50%). Esdaile reduced this figure to eight percent (8%) by the use of his techniques, and his patients recovered more quickly and easily than the average surgical cases of his day.

Since then there has been a revival in the interest of hypnosis with more scientific studies being undertaken.

Recent news has focused on women in Iran undergoing caesarean sections with hypnosis, men undergoing vasectomies using self hypnosis and tooth extraction with hypnosis - all who felt no pain whatsoever and, more importantly - recovered far quicker than they would have done had they had general anaesthetics.

This hypnosis script download can help to prepare your client for successful surgery. If they have the chance to listen to a recording of this before you they taken to the operating theatre then they will already be in a hypnotic trance and will awaken after surgery is complete - ready to enjoy a shortened recovery process and focus on enjoying life again.

Help clients to take a journey deep within...

General relaxation, reduction of tension and...

Visualize discovering and dealing with the...

Powerful warrior soldiers are preparing to...

Use your mind power to help to make your...

CFS patients are often observed to be...

Cope better during a Colonoscopy with...

Become in tune with your body and find it...

Help clients to visualize boosting their...

Help clients to relax when living with...

Help clients with diverticulitis to relax...

This is a combination of a script that I...

Dependence on glasses increases the more you...

Overcome a fear of eye surgery whilst awake...

Help clients to relax with fibromyalgia...

This script is designed for people who are...

Promote health and well-being to clients who...