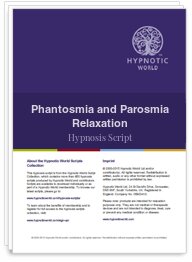 Many people are sensitive to certain smells, but in an olfactory hallucination (phantosmia), you may detect smells that aren't present in your environment, however, with Parosmia this is a distorted sense of olfaction, often resulting in phantom, non-existent, and mostly unpleasant, smells.

Parosmia, on the other hand is a disorder of sense of smell when an odour is actually present, but incorrectly perceived, so this disorder is different than phantosmia.

Both conditions are usually thought to result from damage to the nervous tissues in the olfactory system, which can result from viral infection, head trauma, surgery, and possibly exposure to certain toxins or use of certain drugs.

Sometimes the condition is considered psychosomatic in origin.

When physical causes have been medically ruled out we must assume that this is a psychological condition.

When we are in a highly emotionally charged state of mind our subconscious is open to suggestions. If, for example, you had witnessed a horrific scene where someone said 'I can smell a rat' although you would normally recognize the context in which this statement was said (There is something seriously wrong here), at this particular time you might take that statement literally.

If you later went on to develop Phantosmia then it is possible that you will smell rats (the rodent kind) when they weren't actually present.

As you were in what is commonly referred in hypnosis as a hypnoidal state then you would need to re-enter this state in order to have the negative suggestion removed. This hypnosis script can help you (or your client) to achieve the desired state and relax with the condition once and for all.

An audio recording of this script is also available: Phantosmia and Parosmia Relaxation MP3