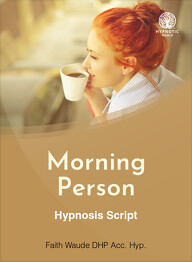 Sharon pops out of bed every day, blood pumping, head full of projects she's anxious to begin. Sharon is a morning person.

Morning people are cheerful at the dawn of the day. However not everyone in the world subscribes to this 'bright and early' mentality.

Professor Jim Horne of the Loughborough Sleep Research Centre adopted the terms 'larks' and 'owls' to describe early and late risers. He suggests that about half the population is neutral leaning toward neither one nor the other. Only about ten percent of the population are extreme morning or evening types. That means most people are not born to be either night owls or morning people, somewhere along the line though entrenched habits develop.

People do have different circadian rhythms that govern things like body temperature, hormone levels, heart rate, and sleep-wake cycles. These rhythms are controlled by about ten thousand nerve cells in the brain that act as our internal clock. Circadian rhythms originate from within an organism but are also affected by external cues like light and eating times. These rhythms help us become accustomed to regular environmental changes.

The fact is that to fully participate in life one must be able to function effectively when the world around them is 'open for business.' Like it or not 'night owls' ultimately have to give in to the larger life cycle to succeed in most common professions. But the transition can be accomplished painlessly and with speed through hypnosis.

This script opens by immediately establishing the desired outcome indirectly through positive and negative language cues. These language tricks suggest the 'right' choice by portraying that idea using positive language cues. For example this script describes awaking "refreshed and alert early in the morning." Positive words like 'fresh' and 'alert' plant the association that this is the favourable belief.

Not being a morning person then is described in indirect negative cues. 'Night owls' are always "letting best part of the day pass them by." These subtle cues speak directly to the subconscious.

The next element of this becoming a morning person hypnosis script involves engaging visualization in a kind of storytelling fashion to inspire your client to generate the right 'emotional climate' of robust well-being, excitement, and anticipation. By generating this emotional state of mind this script is training the subconscious to relate positive emotions and feelings to the idea of being fresh and alert, in other words, being a morning person.

After establishing the subconscious alignment this script uses a form of instruction that helps your client recognize how misconceptions have contributed to this internal body clock error. The nature of the story suggests to the subconscious that being a night owl is ineffective and backwards. This effectively neutralizes all potential inner arguments against becoming a morning person.

This become a morning person hypnosis script then wraps to a close by activating post-hypnotic suggestions that support taking action to re-set the circadian rhythm to the universal morning schedule efficiently, painlessly, and quickly.

Help clients to enjoy being at sea with this...

Overcome anorexia and take charge of your...

Overcome bulimia with this...

Relax during high frequency of urination...

Help clients to relax with bruxism with this...

When a client is 'stuck' in a particular...

Help clients with insomnia to relax with...

Use the Black Door Insomnia script for a...

When clients have difficulty remaining...

Relax with OCD with this...

Help OCD clients to relax with this hypnosis...

Hypnosis Scripts for Habits and Disorders