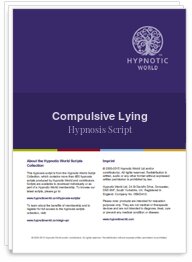 People lie for countless reasons but the prime motivator at the root of them all is fear. Fear of real or perceived punishment.

Psychiatrist Robert Reich M.D. says there is no official diagnosis for compulsive lying. Pseudologia fantastica is not listed in the Diagnostic and Statistical Manual of Mental Disorders (DSM) because no one knows whether the lies are a conscious act or if compulsive liars can control themselves.

There are several characteristics of pseudologia fantastica. One is that the stories usually contain some element of truth. The stories are not illogical or impossible in fact they are often entirely plausible. Compulsive liars will lie about anything big or small for no apparent reason. It may be challenging for compulsive liars to tell the truth when lying gives them power and control.

Compulsive lies aren't the effect of larger delusions about the nature of reality or the world the liar lives in. If confronted the compulsive liar will unwillingly acknowledge the stories to be untrue. Another characteristic of compulsive lying is that the tendency to tell lies is on-going and consistent over time. Telling a lie is not predicated by need. The urge originates from within and can be clinically discerned. The other universal quality of compulsive lies is that they present the teller in a good light. An anecdote that presents them as heroic or well connected to celebrities, for example.

This intentional dissimulation is not the result of brain injury or chemical imbalance but is associated with different personality disorders like antisocial, borderline, and narcissistic personality disorder. The lying is primarily for gain; that of deception, creating a different sense of self even though there seems to be no immediate benefit. Psychiatric diagnoses such as ADHD and Bipolar Disorder include symptoms of lying.

While the intellect may know and wish to take control it is the subconscious mind that rules here. That's why this script takes the time to re-introduce the subconscious association between the truth and self-image. This understanding then continually works under the radar in the subconscious over time to recalibrate a respect and reverence for honesty, to make honesty a new habit.

The subconscious is not limited by time and space and just as we can travel back to a specific pinpoint record of a childhood event in hypnosis, we can also move 'forwards' in time.

By visualizing the progression of change in habit, in how the client lives regarding the truth, and how they feel about themselves this compulsive lying script builds a desired habit forward. How often have we wished we could go back and explain something to our younger selves - tell a younger us to not take it all so seriously or not to stress so much for approval? Age progression under hypnosis offers that opportunity. The selective nature of the subconscious mind while under hypnosis allows for information to be written 'directly on the hard drive' of your mind's computer.

An audio recording of this script is also available: Compulsive Lying MP3

Hypnosis Scripts for Habits and Disorders