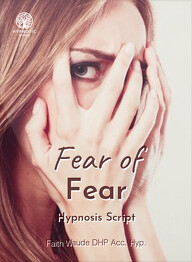 Does your client suffer from a fear of fearful feelings?

Fear is a very powerful negative emotion. Once a sufferer is in its grip, it can cause a them to lose all control over their life.

This Fear of Fear Hypnosis Script can help clients to adopt a more rational view of fearful situations and to accept at a subconscious level that their reactions have been due to their feelings towards fear rather than the risks that it presents to them in reality.

A fear of fear is very real to someone who is experiencing it. Such worries can cause feelings of panic, a racing heart rate, palpitations, a shortness of breath and even temporary paralysis.

People who have suffered from panic attacks can often develop a fear of fear. They know that the panic attack will only last a few minutes or so and that once it's over they'll be fine. But it is the feelings of fear that they dread. This is entirely understandable given the nature of fear and the effects that it can cause.

Why does fear affect us so profoundly?

Technology has advanced far faster than primitive man. In early humans, fear caused a reaction when they were confronted by threatening situations. This is now known as the fight or flight response.

The human body would react to fear by pumping blood into the muscles ready for either action (to fight) or to flee the situation and escape to safety.

We no longer need those responses in today's society as it is often not always necessary to do either. Nevertheless, our bodies are still governed by those unconscious and automatic forces.

This Fear of Fear Hypnosis Script download from Hypnotic World can help clients to overcome a fear of fear by upgrading those primitive responses governed by the subconscious mind to feelings of safety.

By addressing their irrational fear, clients will be able to feel more comfortable in situations that previously caused them to panic, and less prone to worrying about the effect of fear itself.

Average Rating:
Based on 1 review

If you continuously sabotage your own...

Help clients to put those worries behind...

Help relieve the unwanted strain of...

Help your clients to overcome their fear of...

Overcome a Fear of Commitment with Hypnosis.

Fear of the Unknown

Overcome a fear of the unknown and embrace...

Help clients to recover from feelings of...

Help your clients to overcome feelings of...

Help your clients to deal with their...

Help your clients to sleep soundly and...

Manage your stress levels and free yourself...

Help your clients to deal with their fears...

Overcome feelings of shame with the...

Reduce the Stress in your Life with this...