Fear of the Dark Hypnosis Script 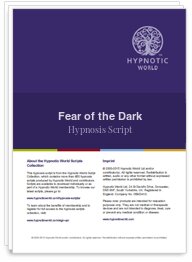 Fear of the dark is common in children and to a lesser degree in adults. Nyctophobia is a pathological fear of the dark which is the Greek nyx for night and phobos fear. Researchers starting with Sigmund Freud attributed the fear of the dark to a deeper separation anxiety. This is more than a simple sharp shiver down the spice or uneasiness. Fear of the dark can take on abnormal and persistent symptoms that interfere with the individual's lifestyle.

Every time Louise turned off her son Zack's bedroom light and closed the door he started crying. He would call and call for her. Perhaps that sounds fairly normal. But when Louise went back into the room to comfort him she discovered Zack was so scared of being left alone in the dark, his palms were sweaty, heart was pounding, and he was short of breath. Her only way to keep the peace seemed to be leaving a light on. After a time Louise began to realise Zack's fears were beginning to affect not only Zack but the rest of the family as well.

The imagination exacerbates the fear of the dark. A jacket hanging over the post becomes a lurking threat. Nightmares contribute to the fear of the dark as well. The frightening dream events mean the child needs the reassurance of light if they should wake up.

Potential treatments for fear of the dark range from neuro-linguistic programming to reflexology and aromatherapy, and cognitive behavioral therapy (CBT). Hypnosis has the potential to truly help. That's why this fear of the dark hypnosis script by Hypnotic World is so valuable.

This fear of the dark hypnosis script first uses age regression. Age regression has the subject play a role simulating the acting out of past events. This state can produce what seem like meaningful emotional experiences from earlier ages. Retrieving past experiences is a function of age regression. First this script has clients recover positive, happy moments in time.

Reliving previous events under hypnosis opens all memories both conscious and unconscious to the client's awareness under hypnosis. Through suggestion of different events earlier ages are reached in the hypnotic state. While some experts disagree many subjects have displayed the personality traits, intellectual functioning, manner of speaking, and handwriting changes that indicates they have, in essence, returned to the earlier time and place in their life as a result of hypnotic suggestion. This may be a result of effective role-playing or "green memories."

The revivification that is part of this fear of the dark hypnosis script is most effective for recalling events associated with strong emotional memories. Effective revivification allows the client to completely re-experience the emotional tone of that happy event.

Then through the power of hypnotic suggestions this script engages clients to carry the happy and content emotions of that event experience with them. Next this fear of the dark hypnosis script employs hypnotic training or re-education. The power of the subconscious mind is such that memories of all events, experience, and emotions are recorded there.

This aspect of this hypnosis script helps clients reform their ideas about the dark, their reactions to the dark, and their feelings about the dark. Learning under hypnosis can have a powerful effect on behavior. This method amplifies the rate at which learning occurs. This hypnosis script for reducing a fear of the dark unravels the foundations of conditioned reflexes. The result is an efficient way of adding new information into the feedback loop regarding the dark. Because this script applies an understanding of how the mind can 'unlearn' or alter behavior under hypnosis it has the potential to transform the client's beliefs and attitudes about the dark.

This effective a method applies new information to stimulate behavior change. We know that hypnosis makes learning quicker and more direct by essentially reducing 'static' surrounding the stimuli. This hypnosis script for overcoming a fear of the dark promotes the unlearning or re-learning of habits, patterns, and reactions.

Fear of the Dark Hypnosis Script
+ FREE Induction and Deepener

Fear of the Dark for Children

Will your child only sleep with a light on? ...

Fear of Monsters (for Children)

If your client won't sleep at night because...

A metaphoric, confusion-type approach to...

Overcome a Fear of Blood with this...

Fear of the Dark MP3