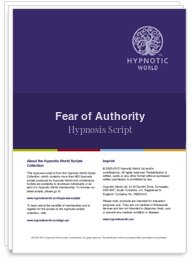 Ever get anxious or nervous around people like bosses, supervisors, professors, or other figures of authority? It happened to Jane. Within a week or two of starting her new job Jane was beginning to feel like a bumbling fool around her new manager. She found herself asking redundant questions sounding more and more foolish. In an effort to make small talk Jane muttered non sequiturs making her awkward feelings loud and clear.

She even fumbled and stammered around the other co-workers feeling anxious because she didn't know them. Her other modus operandi for coping with her discomfort had been to retreat and just stay quiet. That lead people to conclude she was detached or superior in some way when just the opposite was true. Watching how seamlessly others managed to fit into the environment only made Jane feel more inadequate and silly. Her lack of confidence comes across. When Jane's anxious her anxiety is as noticeable as the nose on her face.

Feeling self-conscious or afraid of saying or doing the wrong thing, afraid of getting yourself or others in trouble could indicate a fear of authority. For many people authority figures exude a vague sense of menace as though they are untrustworthy. Just the presence of a figure of authority can make people unable to think clearly.

Those sorts of fears can hamper or destroy a career. Fear of authority can stifle attempts to move up the executive chain. Even presidents can be hampered by this fear, in the form of being rejected by voters. Those who experience this fear are likely to clamp down on their behavior, activities, and relationships refusing to allow anything that might trigger feelings of rejection in their lives.

Someone who accepts authority without question, bending over backward to appease authority figures gives up responsibility for themselves. By trading their own identity to try to be what they believe others expect them to be, to play a role that they believe will win approval.

The fear of authority can be particularly pernicious, difficult to overcome because it is often deep-seated from childhood. The other part of the problem is that everyone answers to someone from a day labourer answering to a supervisor or a CEO answering the board of directors.

Some are conditioned as children to automatically respect figures in authority. Over time or as the result of negative experiences respect can easily cross the threshold into fear. What we truly fear is power that can potentially damage or harm us in some way. Whether the implied threat of punishment is being locked up or through shame this fear conditions into a fear authority figures.

Sometimes, if we grew up under strict, over-bearing parents we fear authority figures because they take on a parental role which means they can push our buttons easily. This hypnosis script for fear of authority helps access these pinpoint events to release the conflicted emotions. By re-visiting the fulcrum event of perhaps enduring a particularly harsh teacher at school or zealously strict adult this hypnosis script re-calibrates the attitude of the subconscious.

The script uses the direct access to the subconscious available during hypnosis to plant ideas designed to help clients manage the overwhelming fears that hover around authority figures. The general goal of this hypnosis script is to help clients develop feelings of control or even mastery over their thoughts and reactions in the face of authority. It's great to have a healthy respect others but not acceptable to bow and scrape just because someone has been handed some responsibility and this hypnosis script can help.

Overcome a Fear of Blood with this...

Fear of the Dark

Overcome a fear of the dark with this...

Help clients to overcome a fear of flying...

Does your client fly regularly and still...