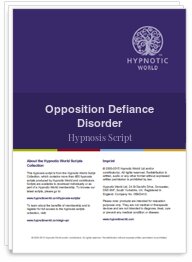 Opposition Defiance Disorder, as its name suggests, is a condition that usually affects children, leading them to be disobedient and showing persistent opposition to authority figures such as parents, teachers and/or other adults.

The child will often suffer from low self-esteem but not show it outwardly and they are often prone to temper tantrums, irritability, intolerance and in some cases anxiety and depression.

This can be stressful and difficult to cope with for the caregiver.

How this Opposition Hypnosis Script Helps

As the child may not even be consciously aware of why they are behaving in such a way, the use of hypnosis helps by directly addressing the subconscious mind, which is the part responsible for automatic responses, emotions and the seat of the imagination.

Because children usually have excellent imaginations they are often the best subjects for hypnosis intervention.

This hypnosis script deliberately uses a confusional technique to enable the child to rethink their actions and reactions.

Dr Milton Erickson, one of the greatest hypnotherapists of our time, brought this method to the fore by successfully treating thousands of his patients for a diverse range of problems.

This Opposition Defiance Disorder MP3 session is better suited for the older child. However, don't expect them to consciously understand the session.

The aim of the program is to create a state of mind that subtly breaks down resistance so that the child is more amenable to the idea of complying as opposed to doing the opposite of what they are asked to do.

An audio recording of this script is also available: Opposition Defiance Disorder MP3