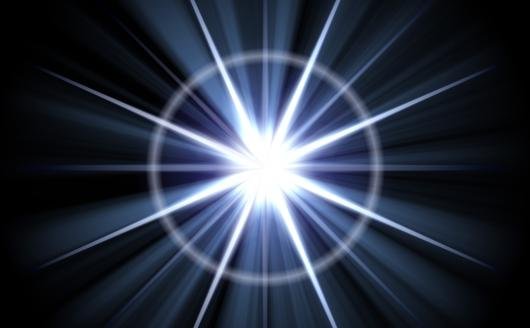 Many years ago a client came to see me for a session of past life regression.

His wife had purchased the session as a birthday present for him as he had always been interested in regression and wanted to discover if he had lived before.

He laid on the couch as I dimmed the lights and switched on the music.

The session went well. I took him back to a place before this existence and allowed his own memories to surface.

As the session drew to a close I used what was then my standard approach to coming out of the regressive state which was taking him up to the light.

My words, as I recall, were: It's time to leave this existence behind and go up to the bright light.

His response: "I don't see the light".

Mine: "The white light is there - just go to the light"

Just as I was wondering what to say next (as I mentioned this was many years ago) - a white wall lamp bulb flew off and landed at his feet.

Of course he didn't see this happen because his eyes were closed but his wife who was sitting opposite watched in amazement.

(There had never been any electrical problems in this building before - I checked this out afterwards).

My response: "You couldn't go to the light so the light came to you".

Now it may have been coincidence that the bulb flew off the wall at that exact moment. (Fortunately no-one was hurt).

Or were other powers in force?

My client told me afterwards that when he was in his teens he had experienced a lot of poltergeist activity.

I'd always retained an element of scepticism on this subject but this experience did make me wonder.