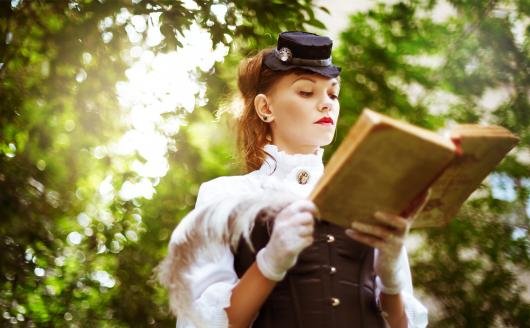 Barbara and Sheila came along for a past life regression session. Sheila was passionately curious to discover if she had lived before so Barbara agreed to come along for a session too, as they were traveling a long distance to my office.

Surprisingly enough it was Barbara who, by her own admission, wasn't really interested in regression or hypnosis, yet she turned out to be the best subject.

I had one or two doubts to begin with that she would actually regress, never mind be a good subject for hypnosis. After the induction and deepener I decided to use the Book of Time script on Hypnotic World and asked her to visualize entering a room which was lined with old and new books of various shapes and sizes.

The books were stacked on shelves as high as the ceiling and were in alphabetical order, so Barbara was asked to look for a book with the initial K, as her surname was Knowles. To emphasize that she was looking for the letter K, I pronounced her name K-nowles.

Immediately Barbara began to speak to me in a Welsh dialect. I asked her how old she was, she replied that she was 8, and further questioning revealed that she lived in a large house with Sir and his wife and that she worked in the laundry room She spoke in a child's voice and when I asked her name she replied 'girl'.

As Girl described the smell in the laundry room, she began to sniff and her whole face lit up with pleasure as she told me how much she loved the smell and her work. Sir treated her well, he fed and clothed her and taught her to read. From her descriptions of the furniture in the house it sounded very 19th century-ish.

I took Girl forward in time to 10 years to when she was 18 and asked her name again. She was still known as Girl. She spent her whole time working for Sir and his wife, reading her wildlife books and sometimes walking in the valleys beyond where she lived with them.

At this age Girl said that everything was black and dismal. Sir was very unhappy because his wife was critically ill. Girl sensed an impending feeling of doom and gloom.

Progressing her a further 10 years resulted in nothingness. She didn't exist anymore so I asked her to go back 5 years from then, to when she was 23. By this time Sir's wife had died and he was pining for his wife. She felt that Sir wouldn't last long and when I asked her what she thought would happen to her she replied, "I don't know, I suppose I will die too".

Progression to a further 2 years revealed that Sir had died and Girl was living in a room with nothing but her wildlife books. She spent most of the day in the room. Sir had left her provided for but she seemed to have no outside interests and still thought of herself as Girl. She never married nor knew her parents and died a year later after living a simple, uneventful life.

When Barbara came out of hypnosis she was clearly stunned by everything that had happened. She told me that she hated wildlife books now as they were so boring. She had never believed in hypnosis and it was only when I mispronounced her name that she slipped into regression because it took her back to when she was a young child and someone in the family had pronounced it that way.

The Book of Time script is available on Hypnotic World. Click here to find out more.