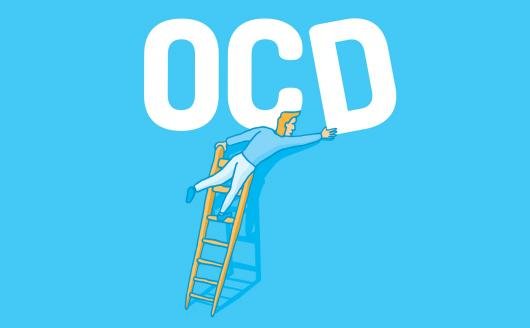 Is there life after OCD? It certainly doesn't seem so at the time, but this true story is here to give hope to those whose lives are taken over by obsessive behaviour.....

At the time of writing, I am fourteen years of age, and can confidently say that I've been through the dissatisfaction (to say the least) of a form of Obsessive Compulsive Behavioural Disorder (OCBD). The reason I say this with relief is that I am getting over it - something I could never have thought of just a fortnight ago. OCBD is a psychological annoyance which combines a number of dis-benefits. I speak from my personal experience in the following pages, and the knowledge I have gathered along the way.

I live in the UK, and have for some years had an 'obsessive behaviour' continuously going backwards and forwards. For example, I might be walking down the street, and I felt as if I had to got back. I would type on the keyboard and delete it and retype it. People noticed this, particularly my Mum, who offered to help, she tried to help, she 'threatened' to take me to the doctors. But would I listen? No. I felt as if I could overcome the problem on my own. So why did I do it? Well, at the time of me getting this problem, it was because I felt that bad would happen if I didn't go back. Silly looking back on it now. I can laugh it off. But the evolving problem was, to my ignorance, to get intolerably worse. I didn't want to see a doctor, as you wouldn't think there was particularly much wrong yourself, would you? It seemed just like a bad habit.

About a year ago, the problem, after dying down a little, worsened and worsened to the extent that, about a month ago, I felt so fed up, depressed and bad with the problem that I couldn't go into town, I couldn't go out, and even getting out of bed was a hassle. At this point, the problem had evolved to me having bad, and unwanted thoughts (not like schizophrenia, or however it is spelled. I had them obsessively, but they were 'mine'). At one time, I felt as if I had to tell my Mum these thoughts to be truthful to her, but as I realized that I could cope with this, the problem worsened. I now felt as if I had to go through the numerical combinations of these thoughts to my mother, and as though I was making other people go through them by doing things, and so I felt I had to tell her them. So the problem got to the peak where I felt as though when I though the word 'everything' (which might have implemented going through the combinations) I had to go back to the physical position I was in when I said this, and adjoin the words 'to do with nothing' to this. Stupid. Until you're experiencing the problem yourself.

So, at about a month ago, you're saying, "what did I do?"? Well, I agreed to see the G.P., who referred me onto a specialist. Long wait, but I got to see her. Funny looking lady - big glasses, sat in weird positions - but not half as weird as the students sat by her, I tell you! The good that came out of that one session was a recommendation for the prescription of Prozac. To tell you the truth, I was scared of taking the syrup. A long list of side affects - basically including aches, pains, tiredness, sickness, heart failure, etc.. - were warned of, but none arrived particularly. A fortnight on, I can agree that Prozac is something of a wonder drug. Others say it, too; it's partially designed to stop OCD - which came to my surprise. Prozac stops or encourages the dispersion of chemicals in the brain, something which gives me the idea that adolescence has something to do with my case. I'm 14, you see.

Now I can look back at the problem and say that it could have made me a stronger, more understanding personality, but I'm new to taking the drug and all I can say so far is that it's worked. I can cycle to town, type freely; they all sound easy, but when you have this problem, you understand it's an achievement of recovery - the road to which I am now on.

A Mother's Story - One Year On

My son was off Prozac a month later, but miraculously the problem still seemed much under control. Looking back I can say that his OCD was probably one of the worst periods of his and his family's life. It affected every one of us in one way or another and I can sincerely sympathize with anyone trying to cope with this problem.

I've added this bit on to offer encouragement and hope for anyone else with OCD. At the time it seems as though it will go on into the long-term, and the light at the end of the tunnel is not even visible. But it CAN improve. I wouldn't say x doesn't have problems even now, but he seems to be coping with them the best way he can. We have long periods of 'normal' behaviour and at the moment his social life has never been better, it has improved a thousand-fold. He still does odd things (for want of a better word), but they don't seem to bother him as much. I think his breakthrough came, not with Prozac but the counselling that he was given and the important step he took of writing his story (above).

(Touch wood) I'm happy to report that we survived what can only be described as a living nightmare and three years on he is a well-adjusted 17 year old who is studying A levels and learning to drive. He has found his niche in life and I have every confidence that he will be extremely successful in the future. If anyone reading this account is living with someone with OCD then please be assured, it CAN be overcome. Maybe not completely but certainly to the point where life seems more bearable. I still think that the counselling helped far more than any drugs could have ever done but I know from experience that this condition affects the whole family in one way or another and that at the time you think things will never improve. Well, they do.

I just came across this case history and thought readers might be interested in hearing about my son's progress. At the time of writing he is 23 and has travelled all over Europe, North and South America, New Zealand - to mention just a few continents (even to the point of living abroad for month's at a time and running his own successful business.

He left University with a degree in English and those years of suffering from OCD seem long past. Yes I remember the nightmare period well but can honestly say that I really am so proud of him and he has turned into the best son any mother could ever wish for. I still believe that admitting he had a problem was the first most important step for him - the second of course was agreeing to seek help.

If this case history can help just one person to cope with or overcome their OCD then it will have been worth writing it down. If you are the parent of a child suffering from this condition then my message to you is that there is a light at the end of that tunnel so don't give up hope.

X still shows a slight trace of OCD - he doesn't think that I notice when we go shopping together - now and again he still has to take a step back (trying to make it look like a normal movement of just checking something) - but of course, being his Mum (and someone who has studied psychology for a long time) I recognize these movements as an anxiety response.

Apart from that I can honestly say that he has progressed in leaps and bounds.

A few years ago he decided to try hypnotherapy.