The Covert Consumer in the Midnight Kitchen 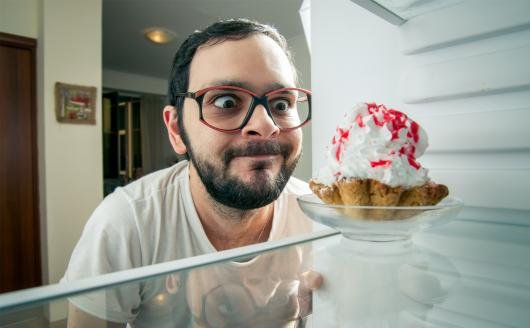 Man eating at night (Photo by © gmstockstudio - stock.adobe.com)
Solving a case of sleep-eating with regression

In hypnotherapy we hear many times of the careless act that leaves a child scared for life. An unjustified scolding, or a bullying episode that a parent never learned of finds its way deep into a child's memory, only to surface many years later as a trigger for later anxiety. And yet, from time to time we see this flow from one generation to another move the other way. This was one such situation.

My client was a gentleman who was successful at the highest levels in the performing arts. His high profile, abundance of talent and ability to bring joy to so many contribute to what appears a happy and successful life. However, like so many of us, he also has a secret habit he feels ashamed of and embarrassed about, which he hides from even his closest friends.

Many mornings when he gets up, he comes into the kitchen to find remnants of food. These are often leftovers of the most elaborate dishes, always prepared for one. He has no memory whatsoever of any visitor, or providing any such meal. It is just as though someone has come into the house, feasted plentifully and then left without clearing anything away. This sometimes happens twice a week.

My client knows it is impossible that anyone could be getting into his house. This is not an isolated incident, it has happened periodically over many years, sometimes lasting months with a frequency of about twice a week. At times it fades for a few weeks, only to start happening again. As disturbing as the situation has become, my client has known for a long time there is only one explanation for the situation. It is he himself that is enjoying this feats, though he has absolutely no memory of it whatsoever. He even went to the extreme of weighing himself before sleeping, and on waking up to look for weight shifts.

He came to me when he found there was really no credible solution to this habit. On my suggestion he went back and plotted the last few incidents and we looked at the results. While there was no particularly obvious cause for the night eating episodes, it was evident that they would often take place on Fridays or Saturdays. At first I thought we were looking for something he did himself at weekends, that would trigger the resulting action.

It was evident that the sources of stress in my clients life had increased significantly in recent years. Although hed raised a daughter alone, he'd had a life relatively free from tension up until the teen years of one of his daughters who had acted out quite severely in her teens, until finding her path. She is now an acclaimed singer in her own right. She did however provide a good deal of grief, particularly as a fifteen year old.

It turned out that when in hypnotic regression my client revealed his deep seated fears about his daughter during her teen years. She would go out at weekends, sometimes with men her father resented and distrusted. The fifteen year old would stay out till all hours of the night, sometimes returning drunk. For a father raising his daughter alone this was deeply upsetting. His daughter was reacting against her only parent, a father who loved her dearly.

Although his daughter came through this period relatively unharmed, her father would wait up many nights generally at weekends, waiting for her to arrive home. He'd wait up in the kitchen, sometimes preparing the most elaborate dishes. He found this kept him awake and took his mind off whatever was happening to his daughter. In hypnosis it became evident that the later feelings of insecurity and anxiety were triggering a repeat of these lonely nightly vigils. It was a behavior that had served him well in the past. His mind simply decided to re-enact the same activity to deal with the new and unrelated stresses of his life. He was quite literally still sitting up at night waiting for his teenage daughter to come safely home. The fact that she has been married for the last twenty years to a loving husband in California was something his subconscious mind had conveniently overlooked in its desire to find a coping tool for stress.

Once identified this was a simple situation to remedy and my client left feeling greatly relieved and three months later has not had a single instance of night eating since. He was able to chat with his daughter about the situation and laugh about it how it had affected him for all these years. His daughter, incidentally now has three daughters of her own, just entering their teenage years.