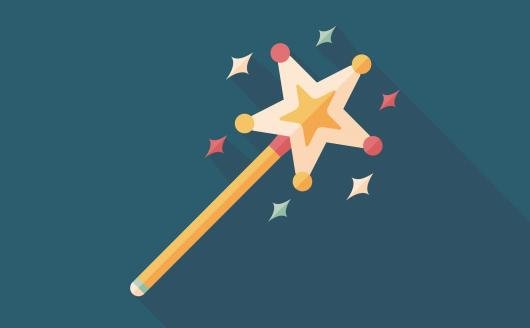 I often tell clients that I can't just wave a magic wand to cure them - however, this case history, sent in by Hypnotic World member Jenny Guy made me reconsider - and we'd like to share it with you.

Jenny was asked to help a 5 year old girl with her fears. (Names are confidential, but we'll call her Kate). Kate had a fear of alarms, especially fire alarms and it caused her to get up several times a night to use the bathroom, she subsequently became a very nervous child.

Knowing that many 5 year olds believe in magic and fairies prompted Jenny to use this belief system to help Kate. So before the hypnosis session, Jenny made a 'magic wand' and placed it in a brightly colored box in her back garden, where a plant pot had been.

During the session, Kate was told that the fairies had left her a magic wand which would protect her from any bad feelings that she might have when hearing a fire alarm. All she had to do was to touch herself with the wand and she would feel fine. Jenny also installed in Kate's mind that if a real fire should occur then her mummy would warn her of it.

Afterwards they went out into the back garden and 'discovered' the magic wand.

Kate began to feel much safer and became more confident in herself, sleeping better and losing her fear of alarms.

A similar procedure was used in Steven Heller and Terry Steele's book 'Monsters and Magical Sticks' with a child who suffered from nightmares. This is a great little book packed with useful information.

You can learn so much from the past.

Why not take a look at my web site,