Fear of Flying - The Head Mistress 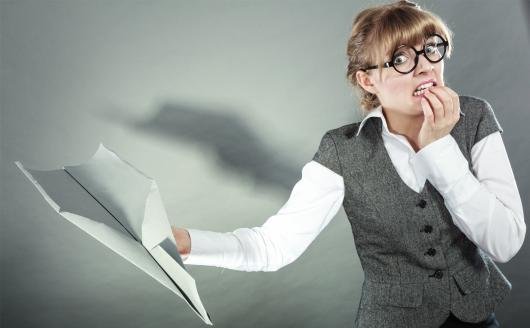 Teacher with fear of flying (Photo by © Voyagerix - stock.adobe.com)

I would like to share this experience of helping a respected headmistress to overcome a fear of flying.

Jane (name changed for privacy reasons) was due to fly abroad in 3 months time. I have found that 3 sessions (sometimes 2, depending on the outcome of the first session) seem to work finer.

The third session is always scheduled as near as possible to the clients flight date - the reason for this is to reinforce any positive suggestions or introduce new ones according to whatever issues might have cropped up during the (usually middle) one.

My first session with Jane was based on the usual routine of asking questions, taking notes on her background history, observation, suggestibility tests and a mini induction involving visualizing travelling on a plane and discussing her feelings about how she felt whilst flying.

Jane was a good subject - she was able to relax and easily enter trance - she could also visualize being on the plane but reported a (lesser) level of discomfort.

The fact that there was any residual discomfort after this first session told me that we had not addressed the true cause so we arranged for a second session which would involve regression.

Naturally I asked Jane if she was comfortable with this and she said - yes - anything to be able to overcome my fear of flying.

So on our second session I set up the usual ideomotor responses with Jane and took her into hypnosis.

Going back to the cause wasn't quite as easy as I had originally anticipated.

For example - I asked her - where were you when this fear first developed?

On an airplane? Her answer was emphatically No.

Planning a holiday? - No again.

Were you at home? Yes

Were you watching TV? (Just in case a plane crash had beam reported) - answer again was No.

(I should explain at this point why I only used the ideomotor signals - Jane was far too relaxed to speak and I was looking for total involuntary signals).

We had already established that her fear started between the age of 6 or 8 so my next step was to ask - was anyone with you? The answer was yes.

Was this a family member? - Yes again.

At this point I told her to go back to the age of 6 or 8 and see herself in the home that she lived at the time with a member of her family where this fear had begun. She could experience the years peeling off like the layers of an onion skin (I was probably a bit naive and too imaginative in those days - this is a case history from about 15 years ago which stands out vividly in my mind).

At the end of the session Jane told me that she had visualized everything perfectly.

She was 8 years of age and her Uncle was babysitting her. He showed her photographs of a recent holiday with his brother (Jane's father).

Jane's Dad had a BIG Fear of Flying and his brother took enjoyment of photographing his brother during a panic episode on a plane.

Jane - being at an impressionable age - was very close to her father and she identified herself with him. So she took on his fear as her own.

And of course - being a headmistress meant that she had studied and matured in a naturally progressive way - but on an emotional level she was obviously unable to transcend from this inherited fear of flying.

The third and final session (just before her flight) was used to remind Jane that this was not actually her own fear - rather a learned fear - she had taken on someone else's fear (her fathers).

I then used the fear of flying script from Hypnotic World again - this time no anxiety was reported afterwards.

Three weeks later I received a thank you card from Jane for helping her to have a totally enjoyable flight and she recommended several people to me afterwards for a variety of problems.

“I find the selection of scripts provided excellent. I am enjoying going through them. I have used several so far on my clients and they work a treat.”
John O'Toole