Overcoming a Fear of Flying with Hypnosis 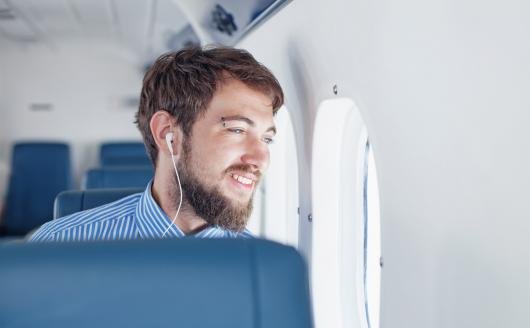 When Sandi phoned up to enquire about hypnotherapy treatment for her fear of flying she explained that she was due to get married in 3 weeks time and was going on holiday to Australia. She was anxious about the long flight, dreading leaving her home and her anxiety was so severe that it was spoiling her anticipation of the forthcoming wedding.

We booked 3 appointments - the final one to take place the evening before her flight (2 days after her wedding).

Sandi was a bright, attractive young woman in her early 30s. She told me that she also suffered from OCD and was always worrying about her health and had a morbid fear of death.

I asked her if she was aware of when her anxieties had started and she explained that she must have had them already at the age of 6 because she vaguely remembered visiting her grandparents quite regularly to spend weekends there (without her parents) and she was always sick. Her parents thought it might be a change in the water as there was no other obvious reason, so they gave her a large bottle of water to take from home which seemed to help (even if she didn't actually drink the water).

I figured there was a degree of separation anxiety and after discussing her problem at length we proceeded with hypnotizing her for her fear of flying. I explained that the second session would be a regression one to find the cause of her symptoms and she was quite happy with this.

When I saw Sandi again the following week she said that her anxiety had much improved but there was still a bit there. She proved to be a good hypnosis subject - we set up ideomotor signals and she responded perfectly.

I often use ideomotor to discover the cause of a problem because often clients are too relaxed to speak and sometimes there is a conscious element to their responses and I'm looking for a genuine response from the subconscious mind.

We pinpointed the originating trigger to when Sandi was 2 years of age. Her subconscious mind told me that she recognized the incident and was reviewing it so we moved on to using an inner child visualization and then have the old incident fade away on screen.

Her subconscious mind signaled that this wouldn't be a problem for her any more (general anxiety and flying), however when I brought Sandi out of hypnosis she told me that she hadn't been able to see anything, although she felt as though she was 'floating through the air'.

I assured her that we'd received a positive response from her subconscious mind and it was possible that a memory from 2 years of age could have been displaced by her conscious mind but nevertheless she should feel immensely better.

The next time I saw Sandi she was already married and told me that people had been amazed at how well she sailed through her wedding day - none of the usual jitters or nerves. She also told me (without being prompted) that her anxiety had gone down from 10 to 4.

But what had amazed her most of all was that she discussed the regression with her mother who told Sandi that when she was 2 years of age her family went on an outing during which time her grandfather (not the one she used to stay with when she was sick) had been carrying Sandi in his arms when he suddenly went flying. He tried to hold Sandi up to prevent her from being hurt and her father managed to catch her just in time. However the grandfather hit his head very hard on the concrete floor and was severely concussed.

There had been a lot of speculation at first about whether he was dead or not but he did survive the incident.

Remember the regression - Sandi couldn't see anything but felt herself floating (flying) through the air? The connection with flying, fear of death and general anxiety were all intertwined.

Our session continued similar to the first one with a visualization of the flight to Australia but with finger signals as well to ascertain her level of anxiety. I'm pleased to say that her subconscious mind indicated that she felt fine about the whole journey and life in general and Sandi's face was full of smiles when she came out of hypnosis.

Two weeks later I received a postcard from Australia informing me that she had really enjoyed the flight and wasn't a bit bothered about the journey back.