Alien Abduction - Was it? Wasn't it? 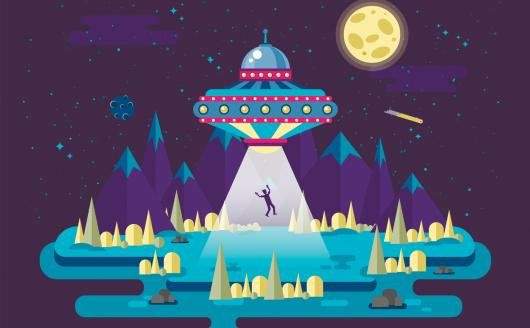 Jim had spent the last 25 years wondering about a certain day in his life which stuck in his mind.

It had been a warm August evening when he had been sharing tea and biscuits with four of his friends in the kitchen of his flat. When someone suggested something a little stronger, Jim and Dean set off to the local off-license to buy a few beers.

They had barely taken a couple of steps outside the flat when Jim noticed the light in the sky. It was an electric red light darting back and forth - it danced around their heads as they gazed open-mouthed.

Dean ran back to the flat and called the other to come and see the light and even as they watched, it changed to two silver stars which hovered above them, before doing somersaults in the sky, before streaking away down hill at the speed of lightening.

Jim and his friends chased the light down the hill - they were joined on the way by two others and all seven of them we entranced by the light in the sky which eventually vanished before their very eyes.

For a while they stared in disbelief at where the light had been, before returning to the flat to discuss their thoughts. Jim phoned the local radio station to see if anyone else had seen it, but there had been no reports.

When Jim walked into my office 25 years later the events of that night were just as vivid in his mind. But what really bothered him was that for years he had suffered 'flashbacks' of images of himself being led down a slope to the saucer shaped vehicle waiting for him. And laid on a bed he realized that the aliens could communicate with him through his thoughts. They were matter of fact, neither friendly or otherwise and he obeyed their every command as if his will had been relinquished completely.

The flashbacks were always the same, though sometimes they were more detailed but always had the same effect on him afterwards. He learned that others who had been with him that night were having similar images and one of his friends had a nervous breakdown as a result of that night.

"All I want to know," said Jim, "is this - were those flashbacks dreams, or were they memories of something that had really happened?" He explained that he'd spend a whole week on Dartmoor just walking and looking for answers. "Can hypnosis help me to remember, or to know, exactly what happened?"

I assured him that there was every possibility that he would recall the events of that night plus he could know for certain whether those flashbacks were really unconscious memories. We set up ideomotor signals in case Jim went too deep into hypnosis to respond verbally, but they weren't necessary as Jim was an excellent subject.

As he went deeper into hypnosis so the events of that night began to unfold as Jim recalled in every detail what had happened to him. I took him forward in time from that date to the first flashback he'd had - then the second and the third and each subsequent one.

Jim could see that these were dreams, not memories, but dreams, figments of his imagination. He knew without a shadow of a doubt that nothing sinister had happened that night. He remembered how he'd started reading books on UFOs and his imagination became active and once he lost all sense of reality and couldn't distinguish a dream from reality.

Jim told me later that he wished he'd been hypnotized years ago. He felt that he'd wasted more than half of his life thinking about that night, and now he felt able to get on with living and enjoying himself and his family.