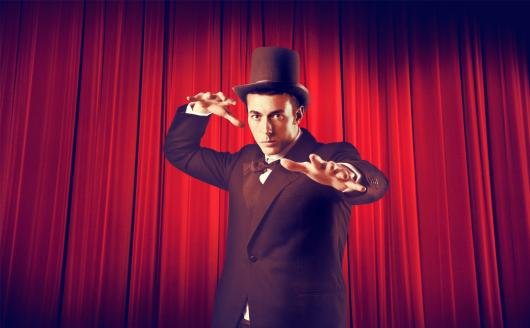 How does it feel to be hypnotized on stage?

Imagine the scene. You have heard about a great stage hypnotist and have psyched yourself up to come and watch this widely acclaimed and fascinating entertainment. You are now sitting in the audience with your friends, waiting for the show to begin. The build-up to the show is electrifying - lights are dimmed and eerie music fills the theatre. A voice from nowhere announces the arrival of this person with seemingly magical powers and the spotlight finds the entertainer as he appears on stage.

His attire is flamboyant to say the least - if you've got a good view you may notice those piercing eyes - he emanates an aura of mystique - charisma - power as he explains what's going to happen tonight.

But first, he says he needs some volunteers and asks for willing participants from the audience to clasp their hands together. Watching in fascination you discretely oblige - a sideways glance at your friends reveal that some of them do, some of them don't.

Next, he suggests that those hands are firmly glued together - so tightly stuck that they simply won't come apart and the harder you try, the faster they stick until it's impossible for you to unclasp those hands. And you can actually feel those hands tightly bound but you are bemused because really you know that you could undo them if you really wanted to - but you don't.

And he asks that those of you who's hands are stuck put them up in the air - still stuck together - and you find that you are one of about twenty five people with their hands in the air - and he beckons you forward onto the stage.

You notice three or four of the others sit down at this point but the others begin to move forward and you find yourself walking down the aisle to the stage - up the steps - where he indicates with a wave of his hand to you which seat to take.

It's bright up here with the lights and the audience now look very dim - the music is lowered and some of the other participants are sitting with their chins already resting on their chest. You sit down too and he tells you that your hands are becoming looser and unstuck and amazingly they just fall apart as you begin to feel heavy and warm and comfortably relaxed.

Now your head is also heavy and your chin resting on your chest and your arms and legs feel as heavy as lead. It's a strange sort of feeling - everything seems so distant - so far away - but you can hear the voice of the hypnotist nice and clear - as though there is no other sound in the world, but his voice.

He lifts up your hand by the wrist and lets it drop onto your lap. If falls limply down like a wet rag and as it touches your lap it's as though your whole body is sinking - deeper and deeper into the chair - as you go down - and down - and down . . .

This time, when he lifts your hand he moves it round in a circular movement and tells you you're stirring the mixture for a cake and your hand continues stirring even after he's let go - and you really can't stop yourself - your hand just goes round and round and round . . .

You notice that some of the others have been sent down off the stage and they look a bit dazed as they make their way back to their seats. But you're comfortable here and you're staying to see the show out.

And when he touches your shoulder from the back and suggests that you're riding a horse you are transported in time and space to a racing ground and you're a young jockey riding on a sleek brown horse - holding onto the reins as you go faster and faster - you must be the first to win this race . . .