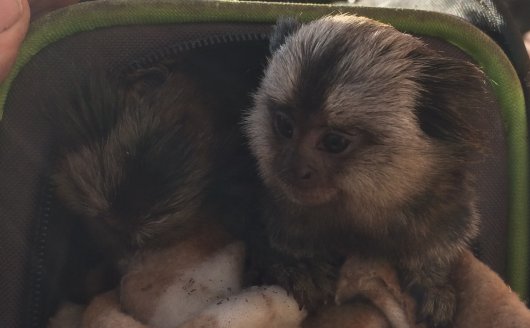 Monkeys in the care of their rescuers. (Photo by Â© Hypnotic World)

It's always nice to receive a little bit of inspiration and we witnessed this recently when my daughter advertised some old wood free to any takers.  A day or two later two lovely ladies arrived in their van to take it away for her and naturally we were curious to know what they'd use it for.

In the course of conversation we learnt that they would chop it all up for firewood to heat their tumbledown cottage which was miles from any amenities.  They had chosen to live there because of the surrounding land which was used to host rescued animals.

Some time ago they had been asked to look after a sheep that was injured and so they nursed it back to health.  As word circulated about their kindness, they were approached by others wanting them to care for sick animals, many of these abandoned, neglected or injured in some way.

These ladies are totally self-sufficient and not only do they cater for most of their own needs they are taking on added responsibility of caring for dozens of unwanted animals (including the two beautiful, 1 month old monkeys displayed in this photograph).

How nice it is to see people with such a sense of responsibility.  So often these days we hear about those whose only priority is looking after number one and turning a blind eye to those less fortunate.

Bringing up the next generation is an enormous responsibility which most parents willingly take on, however as adults we need to encourage them to ultimately become responsible for their own welfare and display acts of kindness to others sharing their planet.

The effects of influence start from a very early age as we are continually bombarded by messages, direct and indirect on every level.

These messages may be positive, beneficial ones or they can be negative, unwanted suggestions.

Some of these messages will bypass the conscious critical factor and the negative ones can take effect on a deeper, subconscious level leading to anxieties, fears and lack of confidence in oneself and one's ability to become independent, responsible adults.

A recently revised script on accepting responsibility from Hypnotic World can help young adults to take responsibility in order to become valued members of their society, full able to stand on their own two feet.